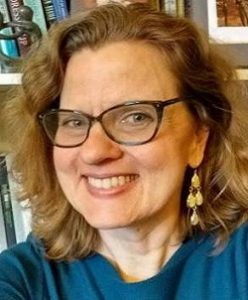 Mary Trotter is an Associate Professor of English and Interdisciplinary Theatre Studies. She is the author of two monographs: Ireland’s National Theaters: Political Performance and the Origins of the Irish Dramatic Movement (Syracuse 2001) and Modern Irish Theatre (Polity 2008). Her current research project, “Actresses and Activists: Feminism, Nationalism and Theatricality in Early Twentieth-Century Ireland,” examines the ways several notable Irish women negotiated the relationship between their labor as theatre performers and their political activism during a period rife with social and political change, locally and internationally. She is also starting new work on theatre and identity in nineteenth-century American and European theatre. She enjoys teaching theatre history, dramatic literature and Irish Studies courses at the undergraduate and graduate levels. Her service to the university and profession include: Founding Director for the Interdisciplinary Theatre Studies Program (2014-2018) Editorial Advisory Board Member for Modern Drama (2007-Present), and President of the American Conference for Irish Studies (2013-2015).