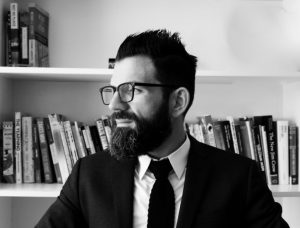 Kirk is Assistant Professor in English. Prior to his appointment in the Department of English at the University of Wisconsin-Madison, Kirk was a Lecturer (US Assistant Professor equivalent) in World Literatures in English at the University of Bristol, UK. After receiving his Ph.D. in Comparative Literature from UCLA, Kirk was a Postdoctoral Research Fellow at the University of Witwatersrand’s Institute for Social and Economic Research in Johannesburg, South Africa. He has published articles in the Cambridge Journal of Postcolonial Literary Inquiry, Safundi: Journal of South African and American Studies, and Critical Philosophy of Race, as well others.

His research has been funded by the Andrew W. Mellon Foundation, Fulbright-Hays, and the Brigstow Institute. In 2021, Kirk was a “Futures” Fellow at the Rachel Carson Center for the Environment and Society in Munich, as well as a Visiting Scholar in Residence at the Penn State Humanities Institute.

Kirk has also co-created a series of workshops, titled “Anthropocene Storytelling,” which employ speculative and creative methodologies for thinking about environmental precarity and climate change. Using narrative as a form of ecological knowledge these workshops encourage participants to engage in acts of speculative storytelling as a way to think about planetary change. “Anthropocene Storytelling” has been hosted by numerous institutions and platforms including the Pennsylvania State University, the University of the Witwatersrand, and “Visions & Voices” at the University of Southern California.

“Seed Bags and Storytelling: Modes of Living and Writing after the End in Wanuri Kahiu’s Pumzi.” Critical Philosophy of Race: Special Issue on Race and the Anthropocene, v. 7.1, January 2019, pp. 107-123.