Position title: Professor of English and Gender and Women's Studies 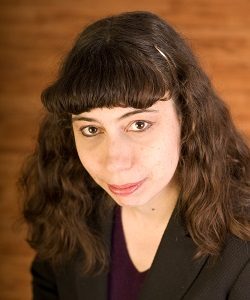 Ellen Samuels is a founding member of the UW Disability Studies Initiative and current Faculty Director of the Open House Gender Learning Community. Her critical work has appeared in numerous journals and anthologies, including Signs: Journal of Women in Culture and Society, Feminist Disability Studies, GLQ, MELUS: Multi-Ethnic Literatures of the United States, The Disability Studies Reader, and Amerasia. Her awards include the Ed Roberts Postdoctoral Fellowship in Disability Studies, the Catherine Stimpson Prize for Outstanding Feminist Scholarship, and two Lambda Literary awards. She is working on two new books, Double Meanings: Representing Conjoined Twins and Body of Mine: A Memoir in Genetic Sequence.

Double Meanings: Representing Conjoined Twins analyzes representations of conjoined twins in literature, film, history, and popular culture from the nineteenth through twenty-first centuries. The guiding principle for this project is to reverse the sensationalism usually attached to public discussions of conjoinment by turning the lens of fascination back onto the cultural meanings attached to representations of such twins. I explore what these representations tell us about the workings of power in different cultural settings, especially as conjoinment intersects with more familiar identities of race, class, gender, and sexuality. Thus I turn away from broad philosophical questions to explore such historically-located areas of inquiry as colonialism, enslavement, sexual science, modern consumerism, and globalization.

Combining literary analysis, legal history, and visual culture, Ellen Samuels traces the evolution of the “fantasy of identification”—the powerful belief that embodied social identities are fixed, verifiable, and visible through modern science. From birthmarks and fingerprints to blood quantum and DNA, she examines how this fantasy has circulated between cultural representations, law, science, and policy to become one of the most powerfully institutionalized ideologies of modern society.