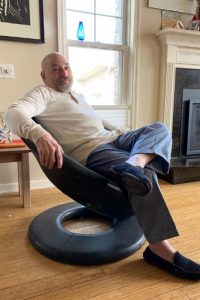 Eric took a position at University of Wisconsin-Madison in 1961. UW-Madison’s Department of English remained Eric’s beloved scholarly and teaching home for the next 60 years: instructor, 1961-1963; assistant professor of English, 1963-1966; associate professor, 1966-1970; professor, 1970-1982; and Edgar W. Lacy Professor of English, since 1982. He chaired the English Department and served as their Director of Graduate Studies.

Prof. Rothstein was awarded with the University Houses professorship in 1982. He was named a fellow in American Council of Learned Societies in 1973. Eric was awarded with a National Endowment of the Humanities fellowship in the summer of 1980. He was a fellow at Institute Research in the Humanities in 1985. Eric was a vocal supporter of the TAA, the Teaching Assistants’ Union.