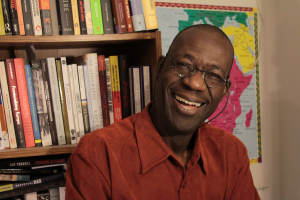 The English Department is mourning the loss of Professor Teju Olaniyan, a visionary thinker, dedicated mentor, and most beloved colleague and friend. A world-renowned expert in the study of Anglophone literatures and cultures of Africa and the African Diaspora, Teju was instrumental in creating the Black Global Literatures cluster in our department. His voice could fill a room, his generosity made us all better. We are stunned at this loss and send our deepest condolences to his family.

The following obituary is courtesy of University of Wisconsin-Madison Communications.

Tejumola (Teju) Olaniyan, Louise Durham Mead Professor of English & Wole Soyinka Professor of the Humanities at the University of Wisconsin–Madison, died suddenly at his home in Madison on Saturday, Nov. 30. He was 60.

“Professor Olaniyan’s passing is a shock and a tremendous loss to multiple communities. He was an internationally renowned scholar and a leader in the humanities as well as a beloved colleague and mentor,” said Susan Zaeske, associate dean for arts and humanities in the College of Letters & Science. 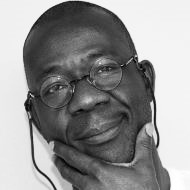 Olaniyan was an internationally-recognized scholar of African, African American, and Caribbean literatures, post-colonial studies, genre studies and popular culture studies, whose distinguished body of work serves as a foundation for other scholars around the world in African and Diasporic studies. Olaniyan’s academic homes at UW–Madison included the departments of English and African Cultural Studies.

He was a beloved teacher and mentor who nurtured community among his students. He welcomed students to his home this past Thursday, to share Thanksgiving with his family.

“Teju was a brilliant scholar and an extraordinarily dedicated mentor to graduate students and junior colleagues. We are losing an adventurous interdisciplinary thinker and a colleague and friend revered for his humanity. His wisdom and intellectual generosity lifted us all,” said English Department Chair Anja Wanner.

In his 18 years at UW–Madison, Olaniyan served as department chair of African Cultural Studies, as well as a Senior Fellow and Interim Director at the Institute for the Humanities. In recognition of his distinguished career of research, inspired teaching, and innovative program building, in 2019 he was awarded a WARF professorship, one of the highest honors UW–Madison has to bestow. He served as the president of the African Literature Association from 2013 to 2014, and on the African Studies Association’s Board of Directors from 2012 to 2015, including as program co-chair of the 2012 ASA Annual Meeting. He was currently serving as the editor-in-chief of the Journal of the African Literature Association.

Olaniyan was the author and editor of many books. His latest project, one he worked on painstakingly for many years, was published in 2018. ‘Taking African Cartoons Seriously: Politics, Satire, and Culture’ examines the rich diversity of cartooning across Africa and highlights issues facing its cartoonists today, such as sociopolitical trends, censorship, and use of new technologies.

He served as the editor of “Enchantings,” a collection of writings examining how the state has influenced culture and cultural production in Africa, and was the co-editor of “Audible Empire: Music, Global Politics, Critique,” which shows how musical practice has been central to the spread of empire around the globe. Professor Olaniyan was the lead editor on “The African Diaspora and the Disciplines,” a collection of essays reflecting on the challenges of diaspora scholarship. His monograph “Arrest the Music! Fela and His Rebel Art and Politics” is widely recognized as a masterful interdisciplinary study of modern African popular music.

“Teju was an intellectual giant in our field, everything one could ask for in a colleague, and a thoughtful friend and role model,” said Katrina Thompson, chair of the African Cultural Studies Department. “He was the elder in our department, someone we all looked up to, and he will be greatly missed.”

In a tribute to Professor Olaniyan on the occasion of his 60th birthday earlier this year, his fellow scholar (and former teacher) Biodun Jeyifo, professor of African and African American Studies and of Comparative Literature at Harvard University, wrote that “for most intellectuals of the African world, the diasporas of our continent in the rest of the world are places of endless cycles of sojourns and returns… Teju’s work, his productivity, in at least the last 10 years, has been largely predicated on this constitutiveness of journeys back and forth between home and diaspora, nation and the world. He is acutely aware of Africa’s structural disadvantages, its ‘development of underdevelopment’ in the global order of neoliberal capitalism, together with their effects on institutions and practices of the state on the arts and the media in our continent. But unlike in the past, this ‘unhappy consciousness’ is deeply inflected with a sense of possibility, of an openness to a futurity that is not decreed but must be achieved by us.”

Olaniyan is survived by his wife, Mojisola Olaniyan, who is the assistant dean and director of academic enhancement at the UW–Madison Law School, as well as his children Bolajoko and Olabimpe.