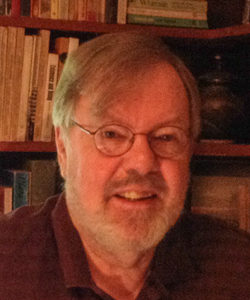 Martin Nystrand, a Composition & Rhetoric researcher and an education theorist at the University of Wisconsin-Madison, is Louise Durham Mead Professor of English Emeritus, Professor of Education Emeritus, and a former director of the National Research Center on English Learning and Achievement (CELA). His research focuses on the dialogic organization of discourse in both writing and classroom discourse. His writing research examines how writing-reader interaction shapes writers’ writing process and development: The Structure of Written Communication: Studies in Reciprocity Between Writers and Readers (Academic Press, 1986). His classroom discourse research, in collaboration with former sociology professor and director of the Wisconsin Center for Education Research, Adam Gamoran, probes the role of classroom interaction in student learning and was the first large-scale empirical study to document the role of open classroom discussion in student learning: Opening Dialogue: Understanding the Dynamics of Language and Learning in the English Classroom (Teachers College Press, 1997). His study, “Questions in Time: Investigating the Structure and Dynamics of Unfolding Classroom Discourse” (with L. Wu, A. Gamoran, S. Zeiser, D. Long, Discourse Processes, 35 (2003), 135-196) was the first-ever use of event-history analysis to investigate classroom discourse.

Professor Nystrand is currently funded $1.6 million for a 2½-year research project to be done in collaboration with colleagues at the Institute for Intelligent Systems to develop a computer program to autonomously measure and assess classroom discourse as it affects student achievement. No observer or research assistant data collector needed, nothing intrusive in classrooms, no violation of teacher or student identity. Just a super smart phone app-like device and some microphones that autonomously process classroom discourse.

It was through Professor Nystrand’s work on the relation between the contexts of spoken language and the development of student writing at the primary, secondary, and post-secondary school levels, that he became a national figure on education and writing research in the United States, and also became widely recognized internationally as a leading expert in discourse study, working with colleges, universities, and research institutes in Europe, Canada, Africa, and Australia.

Professor Nystrand also was instrumental in two major initiatives on the UW-Madison campus. The first was the resurrection of the universal writing requirement–which eventually became the Communications A and Communications B programs in the university’s General Education architecture–in the early and middle 1990s. Working closely with the chairs of the English and Communication Arts departments and with the Dean of Letters and Science, Professor Nystrand was responsible for the establishment of a core communications requirement in L&S, which allowed for teaching writing and oral communication in small, autonomous sections and which distributed the Communications A requirement across various campus units rather than housing it in any single department. This was a revolutionary development in what was eventually called Writing Across the Curriculum and the University of Wisconsin-Madison’s approach to writing and communications instruction is now seen as a model across the United States.

Professor Nystrand is the author or co-author of almost 80 essays in peer-reviewed journals in English studies, composition and rhetoric, curriculum and instruction, and literary and discourse theory. He is also the author, editor, or co-editor of eight books. His main contributions to the field of writing studies have been his serious integration of the work of Russian literary theorist Mikhail Bakhtin into questions of written discourse–particularly Bakhtin’s notion of ‘multi-voicedness’ and dialogism–and the serious attention he has paid to the intertextual and and intergeneric properties of socially situated writing.

Professor Nystrand served as editor of the journal Written Communication, one of the few venues where emerging scholars working on qualitative and quantitative language research in the field of composition studies could publish their work and have an international audience. He was elected president of both the National Conference on Research in Language and Literacy (NCRLL) and the American Education Research Association (AERA) Special Interest Group (SIG) for Writing Research. Professor Nystrand was also well known, throughout his career, for inviting fledgling scholars (some at the earliest stages or their careers, some as graduate students) to co-author studies and essays with him, and there are more than two dozen such scholars listed as co-authors on Professor Nystrand’s curriculum vitae who have gone on to prominent positions as faculty members and scholars themselves.

In recognition of his research, Professor Nystrand was awarded the 2011 Distinguished Lifetime Research Award from the National Conference on Research in Language and Literacy (NCRLL)