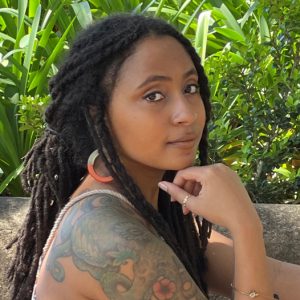 Dantiel W. Moniz is the recipient of a Pushcart Prize, an Elizabeth George Foundation grant, the Alice Hoffman Prize for Fiction, and has been named a “Writer to Watch” by Publishers Weekly and Apple Books. Her debut collection, Milk Blood Heat, is an Indie Next Pick, an inaugural Roxane Gay Audacious Book Club pick, and has been hailed as “must-read” by TIME, Entertainment Weekly, Buzzefeed, Elle, and O, The Oprah Magazine, among others. Her work has appeared in the Paris Review, Harper’s Bazaar, Tin House, One Story, American Short Fiction, Ploughshares, The Yale Review, McSweeney’s Quarterly Concern and elsewhere. Milk Blood Heat was also published in the UK and is forthcoming in Italy, Germany, and Poland soon.