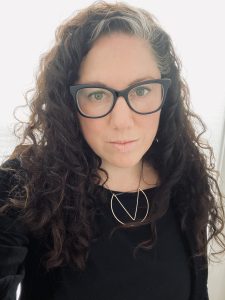 Erika Meitner is the author of six books of poems, including Ideal Cities (HarperCollins, 2010), which was a 2009 National Poetry series winner; Copia (BOA Editions, 2014); and Holy Moly Carry Me (BOA Editions, 2018), which won the 2018 National Jewish Book Award in Poetry, and was a finalist for the National Book Critics Circle Award. Her newest book, Useful Junk, was published by BOA Editions in April of 2022. Meitner’s poems have been anthologized widely, and have appeared in publications including The New Yorker, The New York Times Magazine, The New Republic, Oxford American, Poetry, Orion, The Believer, and elsewhere. She also creates larger-scale documentary photo/text projects on urban environments, with photographers. These include “This is Not a Requiem for Detroit” and “RNC CLE” for Virginia Quarterly Review with Ryan Spencer Reed, and an ongoing project on Miami and sea-level rise with Anna Maria Barry-Jester, part of which was featured as the cover story in the Summer 2021 issue of VQR (“Reimagining Magic City“). Other honors include fellowships from MacDowell, the Wisconsin Institute for Creative Writing, the Virginia Center for the Creative Arts, the Hermitage Artist Retreat, Blue Mountain Center, Loghaven, and Bethany Arts Community. She was also the 2015 US-UK Fulbright Distinguished Scholar in Creative Writing at the Seamus Heaney Centre for Poetry at Queen’s University Belfast, and is currently a 2022 Virginia Commission for the Arts Fellow.