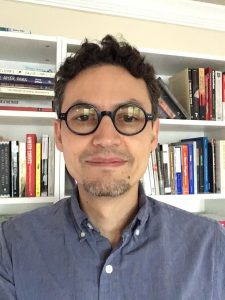 “Leonardo Torres Quevedo’s Automata and the Consolidation of Technological Regenerationism.” Beyond Human: Decentring the Anthropocene in Spanish Ecocriticism. Ed. Maryann Leone and Shanna Lino. (Under contract with University of Toronto Press).

“A Story of Failed Conversion: The Impossible Refashioning of Tradition in Galdós’s Rosalía.” Symposium: A Quarterly Journal in Modern Literatures, vol. 74, no. 4, 2020.

“The Science of Science Education: Zoel García de Galdeano, Mathematics Instruction, and the Progress of Spain.” Decimonónica, vol. 14, no. 1, 2017.

Dr. Useche research interests include the influence of science, technology and industry on Spanish cultural production, and the relations between dynamics of social, political, and economic transformation and the construction of national identity in Spain during the nineteenth and twentieth centuries. He is presently at work on a new book project that focuses on failed inventions, scientific deception, and literary forgery at the turn of the twentieth century in Spain.

Professor Useche believes in the importance of promoting the interdisciplinary trends that govern current modes of cultural analysis. His courses focus on tracing relationships among history, culture, and society, guiding students to identify problems common to both the class topics and their own social environments. Through this effort, he abides by the ethical sense that guides the humanities and social sciences today, according to which teaching and research should be conducted to improve the understanding of a diverse society. Dr. Useche has taught courses on different periods and problems related to the Hispanic world, as well as a wide variety of literature classes.

Founders of the Future: The Science and Industry of Spanish Modernization (Bucknell UP, 2022)

This ambitious new interdisciplinary study proposes the metaphor of the social foundry to parse how industrialization informed and shaped cultural and national discourses in late nineteenth- and early twentieth-century Spain. Across a variety of texts, the book shows how Spanish writers, scientists, educators, and politicians appropriated the new economies of industrial production—particularly its emphasis on the human capacity to transform reality through energy and work—to produce new conceptual frameworks that changed their vision of the future. These influences soon appeared in plans to enhance the nation’s productivity, justify systems of class stratification and labor exploitation, or suggest state organizational improvements. This fresh look at canonical writers such as Emilia Pardo Bazán, Benito Pérez Galdós, Vicente Blasco Ibáñez, and José Echegaray as well as lesser known authors offers close readings of their work as it reflected the complexity of Spain’s process of modernization.