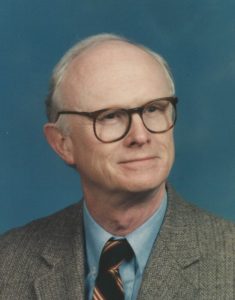 Born in 1932 to the Rev. Donald and Mary Henning in South Dakota, Standish Henning was educated at Shattuck School, Kenyon College, The University of the South (Sewanee), and Harvard University. In 1956 he married Jane McCorkle Nelson.

He joined the University of Wisconsin-Madison English Department in 1960, specializing in Shakespeare, early English literature and the Bible as literature. He added an interest in expository writing, and was instrumental in introducing Writing Across The Curriculum Program to the campus. He served as the departmental director of the graduate division in the 1970s, as associate chair from 1990 to 1996, as well as on several college and university committees. In 1987 he was awarded a Distinguished Teaching Award and upon his retirement in 1999 the first College of Letters and Sciences Distinguished Service Award. As a member of Grace Episcopal Church, he served in most of the activities not reserved for the clergy.

Stan Henning was a man of great depth, humor and decency, a man much loved. He enjoyed a mutual affection with his students that lasted all his life.