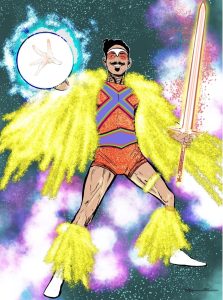 “Superhumans in America,” introduction to The New Mutants (2016). Available here.

“‘I Cherish My Bile Duct as Much as Any Other Organ’: Political Disgust and the Digestive Life of AIDS in Tony Kushner’s Angels in America,” Special Issue On the Visceral, edited by Marcia Ochoa, Sharon Holland, and Kyla Wazana Tompkins. GLQ 21.1 (2015): 121-152. Available here.

Ramzi Fawaz and Phil Jimenez in conversation at The Strand Bookstore for the launch of The New Mutants. YouTube link.

In my research and writing, I explore the relationship between popular culture and radical social movements in the modern US. I am especially interested in the ways that movements for women’s and gay liberation, Black power, AIDS activism, and the third world left have used literature, film, and visual media as vehicles for giving voice to commonly marginalized groups like people of color, women, sexual and gender outlaws, and the differently abled. I am drawn to the question of how cultural production—the making and telling of stories in various creative mediums and genres—has been used by these groups to participate in US political life when other avenues of civic engagement have been denied them. In other words, my work asks how reading and writing books, making and watching movies, drawing and interacting with comics and visual art among countless other cultural activities become ways for people to participate in democracy and envision the kind of social and political world they desire, and perhaps might one day bring into being.

My first book, The New Mutants: Superheroes and the Radical Imagination of American Comics, examines how the American superhero became a cultural embodiment of the political aspirations of sexual, gendered, and racial minorities in the post-WWII period. Specifically, I argue that the transformation of the superhero from an icon of white masculinity in the 1940s and 1950s to a social and species outcast, or “mutant,” in the early 1960s, enabled comic book writers and artists to articulate the figure to a variety of left-wing political ideals that celebrated the lives and worldviews of those most excluded from the US social order. In an early review of the book, Pulitzer Prize winning author Junot Díaz wrote that The New Mutants is “A powerhouse one-of-a-kind book! By charting the radical transformations of the comic book superhero in the post-war period, Fawaz brings to light the extraordinary secret history of American Otherness. Truly fantastic.”

My second book Queer Forms, was recently published by NYU Press. Queer Forms explores how the central values of 1970s movements for women’s and gay liberation—including feminist equality, consciousness-raising, separatism, and coming out of the closet—were translated into a range of US popular culture forms. Throughout this period, feminist and gay activists fought social and political battles to expand, transform, or wholly explode definitions of so-called “normal” gender and sexuality. They inspired artists, writers, and filmmakers to invent new ways of formally representing, or giving shape to, non-normative genders and sexualities. Through studies of queer and feminist cultural productions including Mart Crowley’s The Boys in the Band (1970), Armistead Maupin’s Tales of the City (1976-1983), Lizzy Borden’s Born in Flames (1983), and Tony Kushner’s Angels in America (1989-1991), I illuminate the ways artists innovated in many popular mediums and genres to make the experience of gender and sexual non-conformity recognizable to mass audiences in the modern US. Ultimately, Queer Forms tells the history of forgotten feminist and queer popular culture from the 1970s, including lesbian sci-fi cinema, gay serial fiction, and queer comics art, to recover how these rebellious queer art forms paved the way for our current gender and sexual revolution.