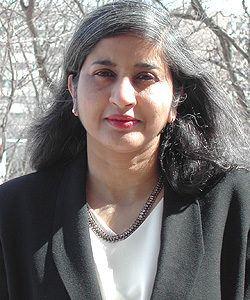 Cosmo-Modernism and the Other Theatre. A study of modernist drama and theatre in India, 1950-1990.

Ambivalent Modernity and the Processes of Modernization in Urban Indian Theatre. A study of the transformative conditions under which urban theatre has evolved in India since the mid-nineteenth century.

Professor Dharwadker has held fellowships from the NEH, the American Institute of Indian Studies, the International Research Institute, Freie Universität (Berlin), the Newberry Library, and the Folger Library, among others. In 2018 she received the two-year Vilas Associates Award from the UW-Madison Graduate School, and from 2007-12 she held the H.I. Romnes Fellowship at UW-Madison for outstanding scholarship in the humanities. She serves, or has served, on the Executive Committee of the American Society for Theatre Research (2018-21), the editorial board of Contemporary Literature (2016- ), the Fulbright Screening Committee for India (2006), the Gerald Kahan Prize Committee of the American Society for Theatre Research (2005-08), and the editorial board of Genre (1991-95). Professor Dharwadker has lectured widely at institutions in North America, Europe, and India, including Harvard University, Washington University, Freie Universität (Berlin), Yale University, University of Toronto, Rutgers University, University of Pennsylvania, University of Chicago, and Delhi University.