A Digital Humanities project developed by Professor Martin Foys is changing what is possible in medieval studies—and beyond. The project, an open-access software platform called Digital Mappa, can be used for editing, annotating and publishing collections of digital images and texts, and is available to anyone with access to a computer and the internet.

“The premise of Digital Mappa is simple,” explains Max Grey, a graduate student in his third year as Prof. Foys’s research assistant,

“if you have a collection of digital images and texts, then you should be able to create a project where you can link together specific moments on these images and texts, annotate these moments as much as you want, generate searchable content, collaborate with your friends, and publish your work online for others to see and share. Oh, and you should be able to do all of this with as little technical expertise as possible. It’s an open-access DH platform for your own workspaces, projects, collaborations, and scholarly publications.”

Digital Mappa didn’t begin with such ambitious aims. It all started back in 2007, when Prof. Foys got the idea for a digital edition of an early medieval map of the world called the Cotton Map. While researching information about the map, Prof. Foys says, he soon “realized that the project would be better developed as a presentational network of medieval world maps and their shared content and sources.” Funded by two National Endowment for the Humanities grants, Prof. Foys and his team developed a basic demo version of Digital Mappa and began a series of individual scholarly projects to showcase the platform’s potential, including Virtual Mappa, a partnership with the British Library to edit the Cotton map and several other medieval maps of the world. When Prof. Foys came to UW-Madison in 2016, the project was rewarded a multiyear UW2020 grant, which gave him the resources to develop a full, improved version of the platform. Today, Digital Mappa hosts a growing collection of scholarly projects, including Virtual Mappa and Old English Poetry in Facsimile, a collection of medieval manuscript images alongside modern translations that is currently being developed at UW-Madison. 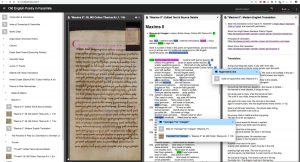 An important facet of the platform’s software is that it doesn’t discriminate between types of documents, allowing users to interact with image and text documents in the same way.  “This is a simple feature that makes possible a lot of different kinds of associations and connections,” says Grey. What’s more, this feature makes it easier for users to consider texts within their broader cultural contexts. “It’s amazing that the site allows viewers to engage with early medieval textual and visual culture across so many different mediums that are not restricted to manuscript pages,” enthuses Sarah Friedman, a graduate student studying medieval literature who has worked as an editor on the project. She continues, “I think it’s really cool that one can engage with the three-dimensional format of amazing objects such as Frank’s Casket and the Brussels Cross. These objects show how the project is invested in looking at early medieval literary culture in terms of how it intertwined more broadly with material and visual cultures.”

Through the Digital Mappa platform, scholars are not only brought into contact with images of varied texts and cultural objects that are physically located in far-flung archives, but it also serves as a virtual space for scholars to connect to one another and the public. Kyle Smith, another medievalist who has served as a graduate student editor, says, “It can be a great workspace for your own research, as well as a platform for making that research publicly available in ways not afforded by more traditional modes of publication.” And as Prof. Foys is keen to point out, the platform is not only for medievalists  “If you’ve got a cohort of digital images and texts, medieval, modern, whatever,” he says, “you can use Digital Mappa to create online scholarship and publications about them.” 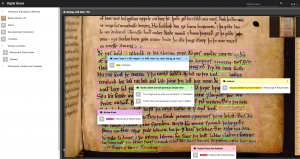 As for the platform’s use as a public resource, Smith, likens the platform to sites like Wikipedia, remarking, “I think the same things that make DM exciting for scholars are what should make it beneficial for the public: DM‘s simplicity and open-access nature remind me a bit of Wiki technology, insofar as it encourages folks of all kinds—scholars, teachers, students, interested members of the public—to collect and disseminate knowledge. The easier it is to do this kind of work, the more such work can be done, and made available to all.” Or as Grey tells us, “We like to say: If you can click, drag, copy, paste, and type, then you can do this; it’s a digital humanities platform built… for the rest of us.”

Now into his second decade with the project, Prof. Foys looks forward to what the future of Digital Humanities has to offer. “I started Digital Mappa because I wanted a way to make the medieval materials I study and teach more accessible to more people, in ways that usefully explained what they were and how they might be understood,” Prof. Foys recalls. “The power of digital media is that you can create layers of meaning on top of the digitized materials, so anybody, scholars, students, the public, can engage with it on a level that benefits them at their own level of learning and expertise.”

For more information about the Digital Mappa platform, and for links to current DM projects, see https://www.digitalmappa.org.

We are always working on improving the Digital Mappa platform, and fundraising for more development work. If you are interested in donating to the English Department to support this work, click here.