This year, we sadly said goodbye to Professor Jeffrey Steele, who died on May 5 at the age of 71. A beloved member of the English Department faculty since 1981, Prof. Steele will be remembered as a generous teacher, colleague, and scholar. 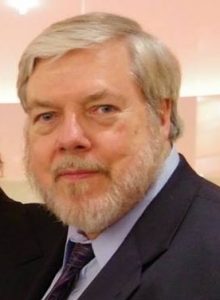 Prof. Steele was a dedicated teacher who inspired countless students. In 1992, he was the recipient of the James R. Underkofler Excellence in Teaching Award, an honor given each year to only four teachers across the UW System. One former student, Joel Cupelli (BA ’09), admired Prof. Steele for his ability to teach “not only language and rhetoric, but the world around you.” Simply put, Cupelli says, “it felt good to be in his classroom.” His lectures were lively and eloquent. Peter Ribic, who served as his teaching assistant several times, recalls a time when Prof. Steele accidentally brought the wrong novel and lecture notes to class, a potentially catastrophic situation. Peter quickly handed over his own copy of that day’s textbook, Margaret Atwood’s Surfacing, and then watched as Prof. Steele gave his lecture from memory. “I don’t mean he cobbled together fifty minutes of lecture-like material,” Ribic remembers. “He gave a focused, tightly-argued lecture, taking us to passages whose page numbers he just seemed to know. It was so virtuosic that I’m not sure any of the students even noticed.”

Department colleagues remember Prof. Steele as a supportive friend whose areas of expertise were as eclectic as they were wide-ranging. As Professor Russ Castronovo recalls, Prof. Steele was “a polymath” whose varied interests were constantly surprising. One may have sought him out for his insights on academic subjects like performance studies or pedagogy, but, Prof. Castronovo remarks, “one always left with something more: a book about tying knots, a story about Frank Lloyd Wright, tips on how to portage a canoe, a recipe for making and storing pesto.” But his support extended far beyond his unique advice. Professor Susan Stanford Friedman, who joined the English Department faculty not long before Prof. Steele, found in him “a sympatico colleague” who strove to make the department a more inclusive place for women. Throughout his career, Prof. Friedman attests, Prof. Steele was “always, a staunch supporter of women writers and of women in the academy—students, faculty, staff.”

A focus on women’s writing was central to Prof. Steele’s work as a literary scholar. Perhaps his greatest scholarly achievement was his groundbreaking work on Margaret Fuller, the feminist Transcendentalist whose writings up until then had largely been ignored. So great were Prof. Steele’s contributions to Fuller studies that the Margaret Fuller Society, of which he was a founding member, has devoted its Fall 2018 newsletter to him. It includes moving tributes from fellow Fuller scholars, former graduate students, departmental colleagues, Prof. Steele’s family members, and close friends. It also includes photos of Prof. Steele from the 1970s and 1980s. A PDF of the newsletter is available here.

If there is a memory of Professor Steele you would like to share, please send us an email.