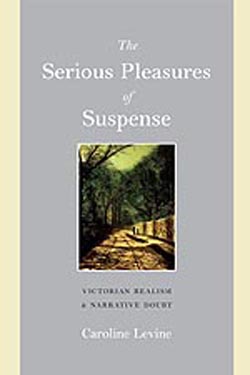 Scholars have long recognized that narrative suspense dominates the formal dynamics of nineteenth-century British fiction, both high and low. But few have asked why suspense played such a crucial role in the Victorian novel—and in Victorian culture more broadly. The Serious Pleasures of Suspense argues that a startling array of nineteenth-century thinkers—from John Ruskin and Michael Faraday to Charlotte Brontë and Wilkie Collins —saw suspense as the perfect vehicle for a radically new approach to knowledge that they called “realism.” Although by convention suspense has belonged to the realm of sensational mysteries and gothic horrors, and realism to the world of sober, reformist, middle-class domesticity, the two were in fact inextricably intertwined. The real was defined precisely as that which did not belong to the mind, that which stood separate from patterns of thought and belief. In order to get at the truth of the real, readers would have to learn to suspend their judgment. Suspenseful plots were the ideal vehicles for disseminating this experience of doubt, training readers to pause before leaping to conclusions. Far from being merely low or sensational, the mysteries of many plotted texts were intended to introduce readers to a rigorous epistemological training borrowed from science. And far from being complacently conservative, suspense was deliberately employed to encourage a commitment to skepticism and uncertainty. In The Serious Pleasures of Suspense, Caroline Levine argues convincingly that the nineteenth-century critics were not wrong about suspense: the classic readerly text was indeed far more writerly—dynamic, critical, questioning, and indeterminate—than modern critics have been inclined to imagine. Offering original readings of canonical texts, including Jane Eyre, Great Expectations, The Moonstone, and The Picture of Dorian Gray, and drawing on a range of historical sources, from popular fiction and art criticism to the philosophy of science and scientific biography, Levine combines narrative theory and the history of ideas to offer a stunning rereading of nineteenth-century realism.