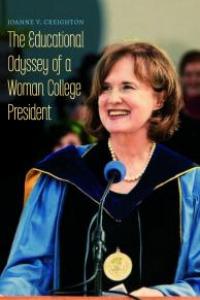 Early in her tenure as president of Mount Holyoke College, Joanne V. Creighton faced crises as students staged protests and occupied academic buildings; the alumnae association threatened a revolt; and a distinguished professor became the subject of a major scandal. Yet Creighton weathered each storm, serving for nearly fifteen years in office and shepherding the college through a notable revitalization.

In her autobiography, The Educational Odyssey of a Woman College President, Creighton situates her tenure at Mount Holyoke within a life and career that have traversed breathtaking changes in higher education and social life. Having held multiple roles in academia spanning undergraduate, professor, and president, Creighton served at small colleges and large public universities and experienced the dramatic changes facing women across the academy. From her girlhood in Wisconsin to the presidency of a storied women’s college, she bears witness to the forces that have reshaped higher education for women and continues to advocate for the liberal arts and sciences.