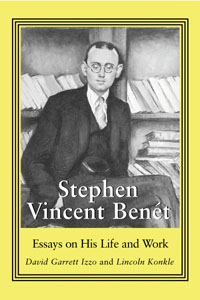 The first group of essays addresses Benét’s life, times, and personal relationships. Thomas Carr Benét reminisces about his father in the first essay, and others consider Benét’s marriage to his wife Rosemary; Archibald MacLeish, Thornton Wilder and Benét as friends, liberal humanists and public activists; and his friendships with Philip Barry, Jed Harris, and Thornton Wilder.The second group contains essays about Benét’s poetry, fiction, and drama. They discuss Benét’s role in the development of historical poetry in America, John Brown’s Body and the Civil War, Hawthorne, Benét and historical fiction, Benét’s Faustian America, the adaptation of “The Devil and Daniel Webster” to drama and then to film, Benét’s use of fantasy and science fiction, and Benét as a dramatist for stage, screen and radio.