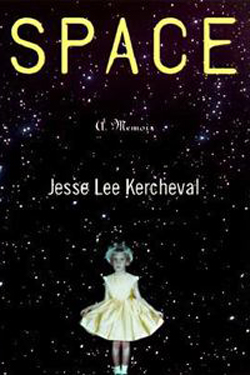 Winner of the Alex Award from the American Library Association

Looking back at a time when America was on the brink of all the big changes coming by way of Apollo 11, The Feminine Mystique, and the Vietnam War, this high-spirited memoir focuses on what it was like back then–for a girl.

Jesse Lee Kercheval opens her story in 1966 when she was a precocious ten-year old girl whose family moves from Washington, D.C. to Cocoa, Florida. Bedroom community to the rocket launchers, Cocoa was a town rising out of a swamp, a city of the future being built out of concrete block and hope. Alligators still wandered across the newly paved subdivision streets, and civilization was based on the twin luxuries of central air-conditioning and mosquito control.

Living in their brand-new house in a brand-new development (called Lunar Heights), the Kercheval’s–father, mother, two little girls, tried to ride the Space Race’s tide of optimism. But even as the rockets kept going up, the Kercheval family was spiraling down. Father hid out at work while Mother overdosed her depression and Jesse Lee and her sister, Carol, hovered at the edge of the nest, having to try their wings too early and too alone. By the end of the book, America has flown to the moon but the Kercheval family, weighed down by the realities of life on earth, has crashed.

Weaving domestic and public concerns, this brilliant rendering of an era juxtaposes the sensibilities of a young woman poised at the edge of adulthood (hilariously, touchingly so) and those of a whole country poised on the edge of things equally frightening–the future of NASA, the outcome of the war and woman’s lib.