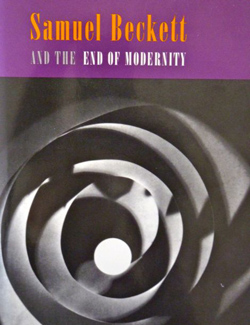 This study explores the relation between Samuel Beckett’s five major novels—Murphy, Watt, Molloy, Malone Dies, and The Unnamable—and the phenomenon that Jean-François Lyotard, Jürgen Habermas, and Gianni Vattimo have described as the “end of modernity.” Through a sustained reading of Beckett’s “pentalogy,” Begam demonstrates how these novels, written between 1935 and 1950, strikingly anticipate many of the defining themes and ideas of Roland Barthes, Michel Foucault and Jacques Derrida, extending from madness and the cogito to the “death of the author” and the “end of the book,” from différance and unnamability to the “end of man” and the “beginning of writing.”

Samuel Beckett and the End of Modernity situates Beckett in relation to a postmodern philosophical intervention that is defined by Friedrich Nietzsche, Ludwig Wittgenstein and Martin Heidegger, and a modernist literary tradition that is represented by Marcel Proust and James Joyce.  Arguing against the tendency to treat the postmodern as the mere negation of Enlightenment thinking—a form of “overcoming” in which the modern is replaced by the antimodern—Begam proposes an approach that is based more on “différance” than antithesis.   Especially important in this regard is Derrida’s claim that there is never “any question of choosing” between modernity (“Western metaphysics”) and a term of opposition (the “overcoming” of metaphysics).  Rather, Derrida recommends what he calls a “new writing” that simultaneously coordinates two modes of deconstruction, at once working critically within the tradition and projecting itself imaginatively beyond that tradition. The pentalogy offers an extended application of this “new writing” some twenty years before the advent of poststructuralism.