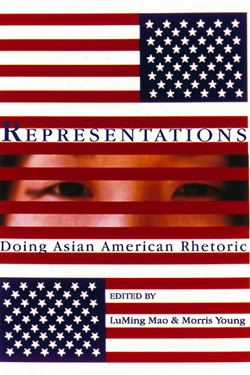 Despite tremendous growth in attention to and scholarship about Asian Americans and their cultural work, little research has emerged that focuses directly on Asian American rhetoric. Representations: Doing Asian American Rhetoric addresses this need by examining the systematic, effective use of symbolic resources by Asians and Asian Americans in social, cultural, and political contexts. Such rhetoric challenges, disrupts, and transforms the dominant European American rhetoric and it commands a sense of unity or collective identity. However, such rhetoric also embodies internal differences and even contradictions, as each specific communicative situation is informed and inflected by particularizing contexts, by different relations of asymmetry, and, most simply put, by heterogeneous voices. The essays in Representations: Doing Asian American Rhetoric examine broadly the histories, theories, and practices of Asian American rhetoric, situating rhetorical work across the disciplines where critical study of Asian Americans occurs: Asian American studies, rhetoric and composition, communication studies, and English studies. These essays address the development and adaptation of classical rhetorical concepts such as ethos and memory, modern concepts such as identification, and the politics of representation through a variety of media and cultural texts. As these essays collectively argue, Asian American rhetoric not only reflects and responds to existing social and cultural conditions and practices, but also interacts with and impacts such conditions and practices. To the extent it does, it becomes a rhetoric of becoming–a rhetoric that is always in the process of negotiating with, adjusting to, and yielding an imagined identity and agency that is Asian American.