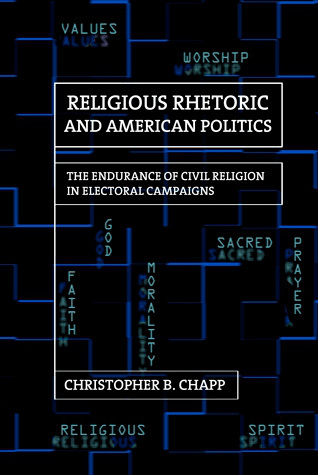 In Religious Rhetoric and American Politics, Christopher B. Chapp shows that Americans often make political choices because they identify with a “civil religion,” not because they think of themselves as cultural warriors. Chapp examines the role of religious political rhetoric in American elections by analyzing both how political elites use religious language and how voters respond to different expressions of religion in the public sphere. Chapp analyzes the content and context of political speeches and draws on survey data, historical evidence, and controlled experiments to evaluate how citizens respond to religious stumping. Effective religious rhetoric, he finds, is characterized by two factors—emotive cues and invocations of collective identity—and these factors regularly shape the outcomes of American presidential elections and the dynamics of political representation. While we tend to think that certain issues (e.g., abortion) are invoked to appeal to specific religious constituencies who vote solely on such issues, Chapp shows that religious rhetoric is often more encompassing and less issue-specific. He concludes that voter identification with an American civic religion remains a driving force in American elections, despite its potentially divisive undercurrents.