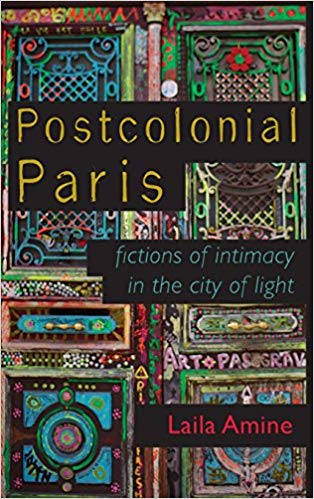 In the cultural imaginary of Paris, there is little room for the working class multi-racial outskirts, unless the subject is Islamic culture and the subjection of women and queer subjects. The Paris imagined in Maghrebi, African American and French immigrant cultures was both invisible in the scholarship and hypervisible as the “Badlands of the Republic” in French mainstream media. Like the city of the Francophile tourists, this other Paris is largely an imagined territory, albeit associated with crime, unbridled patriarchy, and violence.

Un-shackling the sensational and the Paris outskirts, this book chronicles everyday life in the impoverished sectors of the French capital in various contexts and cultural traditions. We find versions of Postcolonial Paris in post-World War II Maghrebi and African American expatriate fiction, 1980s beur fiction and cinema, and contemporary French immigrant cultures. Together, works by Driss Chraïbi, Mehdi Charef, William Gardner Smith, Faïza Guène, J.R., and Princess Hijab register the shifting politics and grammars of race in a nation where it does not appear on the census and where the public overwhelmingly condemns it as an Anglo-Saxon importation.

Spanning 1955 to 2015, authors of African descent have pondered the French tyranny of universalism and interrogated the myth of Paris as a space of liberation for the African diaspora. Some of the most well-known Francophiles such as James Baldwin also wrote about a French capital marred by colonial exclusion. By desegregating the cultural study of Paris to include its impoverished outskirts, the book reveals that writers and filmmakers have deployed Franco-African intimate encounters to articulate the political exclusion of racialized subjects. In the colonial and contemporary eras, their narratives of intimacy can help us better understand the ways in which gender and sexual difference work(ed) to construct, maintain, or challenge racial boundaries.

Praise for Postcolonial Paris:
“Provides unique ways to reread, re-portray the outskirts of Paris, successfully and creatively showing how they reveal France’s history of colonization and continued oppression of racially, sexually, and religiously excluded groups of people”
—Public books

“Amine’s work is impressive in the temporal ground it covers, and the theorisation is supported by very thoughtful in-depth analyses of the works at play. Overall the book provides a cohesive argument and brilliant analyses on the role of spatiality in colonial and postcolonial intimacies in the French capital”
—Postcolonial Studies

“A powerful, highly relevant, and innovative study of the cultural and political role of France’s largest ethnic and religious minority”
—Jarrod Hayes, author of Queer Nations: Marginal Sexualities in the Maghreb

“Effectively demonstrates how racialized stereotyping and ethnocultural marginalization of citizens of North African descent have long betrayed the French idyll of equality and integration. Perceptive and groundbreaking”
—Adlai Murdoch, author of Creolizing the Metropole