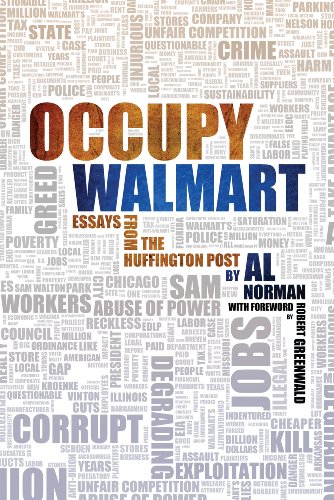 Occupy Walmart exposes the “1% corporation,” with its leaders who have amassed enormous wealth by exploiting the 99% who manufacture its products and buy its merchandise. This is UW English alum Al Norman’s third publication tackling Wal-Mart.

According to Walmart, 200 million people enter their stores every week to shop—and most of those entering are part of the 99%. The power to change the unfair global economy begins in our hometowns. Where better to start than with Walmart—the most ubiquitous symbol of what has gone awry in corporate America today?

Author Al Norman is the foremost anti-Walmart activist in the U.S., helping hundreds of citizen groups fight the establishment of Walmarts in their hometowns. He has appeared on 60 Minutes and been featured in publications such as the Wall Street Journal and Forbes. Al is a regular contributor to the Huffington Post and maintains a blog on his website, Sprawl-Busters.com. Al is the author of Slam-Dunking Wal-Mart! (1999) and The Case Against Wal-Mart (2004).