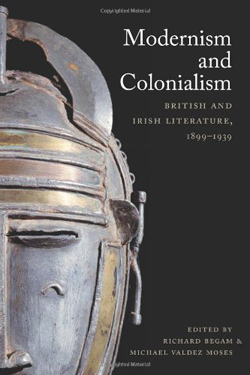 This collection of essays by renowned literary scholars offers a sustained and comprehensive account of the relation of British and Irish literary modernism to colonialism. Bringing postcolonial studies into dialogue with modernist studies, the contributors move beyond depoliticized appreciations of modernist aesthetics as well as the dismissal of literary modernism as irredeemably complicit in the evils of colonialism. They demonstrate that the modernists were not unapologetic supporters of empire. Many were avowedly and vociferously opposed to colonialism, and all of the writers considered in this volume were concerned with the political and cultural significance of colonialism, including its negative consequences for both the colonizer and the colonized. Ranging over poetry, fiction, and criticism, the essays provide fresh appraisals of Joseph Conrad, T. S. Eliot, Ezra Pound, Virginia Woolf, D. H. Lawrence, Wyndham Lewis, E. M. Forster, W. B. Yeats, James Joyce, Elizabeth Bowen, Hugh MacDiarmid, and Evelyn Waugh, as well as Robert Louis Stevenson and H. Rider Haggard. The essays that bookend the collection connect the modernists to their Victorian precursors, to postwar literary critics, and to postcolonial poets. The rest treat major works written or published between 1899 and 1939, the boom years of literary modernism and the period during which the British empire reached its greatest geographic expanse. Among the essays are explorations of how primitivism figured in the fiction of Lawrence and Lewis; how, in Ulysses, Joyce used modernist techniques toward anticolonial ends; and how British imperialism inspired Conrad, Woolf, and Eliot to seek new aesthetic forms appropriate to the sense of dislocation they associated with empire.