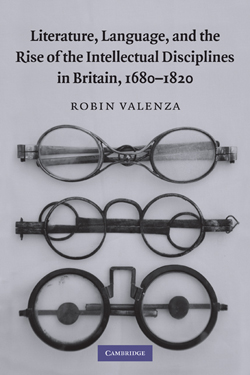 The divide between the sciences and the humanities, which often seem to speak entirely different languages, has its roots in the way intellectual disciplines developed in the long eighteenth century. As various fields of study became defined and to some degree professionalized, their ways of communicating evolved into an increasingly specialist vocabulary. Chemists, physicists, philosophers, and poets argued about whether their discourses should become more and more specialised, or whether they should aim to remain intelligible to the layperson. In this interdisciplinary 2009 study, Robin Valenza shows how Isaac Newton, Samuel Johnson, David Hume, Adam Smith, Samuel Taylor Coleridge and William Wordsworth invented new intellectual languages. By offering a much-needed account of the rise of the modern disciplines, Robin Valenza shows why the sciences and humanities diverged so strongly, and argues that literature has a special role in navigating between the languages of different areas of thought.