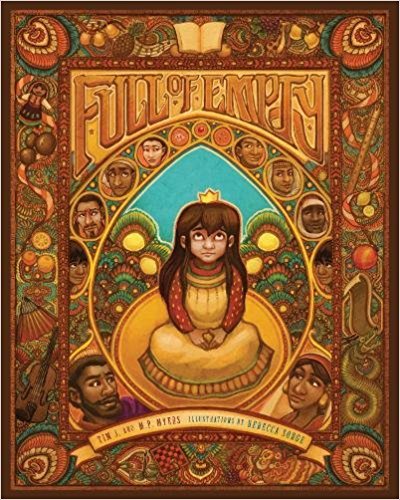 Publishers Weekly said of Full of Empty that “Lush illustrations, a culturally diverse setting, a devoted set of parents, and the suggestion that time and togetherness can help heal emotional wounds give the story a strong impact.” Kirkus asserted that “…young listeners will enjoy the fairy-tale aspect, the appealing pictures, and the satisfying ending…”

Tim Myers, UW Madison English alum, is a writer, songwriter, storyteller, and senior lecturer at Santa Clara University in Silicon Valley. His ebook “Glad to Be Dad: A Call to Fatherhood” (Familius) won the inaugural Ben Franklin Digital Award and is out in a print version. He recently placed a full-length poetry collection, “Dear Beast Loveliness: Poems of the Body,” with BlazeVox Press. His children’s books have won recognition from The New York Times, NPR, the Smithsonian, Nickelodeon, and others. He’s published over 120 poems, won a first prize in a poetry contest judged by John Updike, has a poetry chapbook out (“That Mass at Which the Tongue Is Celebrant”), won a major prize in science fiction, has been nominated for two Pushcart Prizes, and has published much other fiction and non-fiction for children, adolescents, and adults. He also won the 2012 SCBWI Magazine Merit Award for Fiction, and the West Coast Songwriters Saratoga Chapter Song of the Year award.