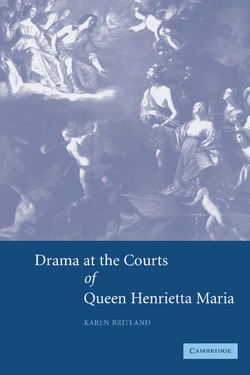 Drama at the Courts of Queen Henrietta Maria considers Queen Henrietta Maria’s patronage of drama in England in the light of her French heritage. Karen Britland challenges a common view of Henrietta Maria as a meddlesome and frivolous woman whose actions contributed to the outbreak of the English civil wars by showing how she was consistent in her allegiances to her family and friends, and how her cultural and political positions were reflected in the plays and court masques she sponsored. Unlike previous studies, this book considers the queen’s upbringing at the French court and her later exile in France during the English civil wars, and is therefore able to challenge received notions about her activities in England during the 1630s. Karen Britland employs innovative research by combining discussions of literary texts with historical and archival research and discussions of art, architecture and music.