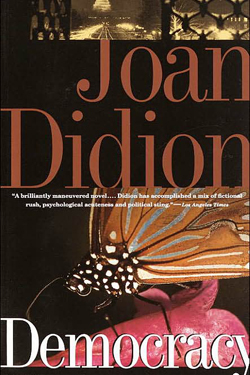 Set in Hawaii and Southeast Asia at the end of the Vietnam War, Joan Didion’s fourth novel tells the story of Inez Victor, the wife of U.S. Senator and one-time presidential hopeful Harry Victor, and her enduring romance with Jack Lovett, a CIA agent/war profiteer who dies shortly after extricating Inez’s daughter, Jessica, from Saigon where the girl had incautiously ventured.

Inez Victor knows that the major casualty of political life is memory. But the people around Inez make careers out of losing track. Her senator husband wants to forget the failure of his last bid for the presidency. Her husband’s handler would like the press to forget that Inez’s father is a murder. These people and events constitute the terminal fallout of democracy, fallout that includes fact-finding junkets, senatorial groupies, the international arms market, and the Orwellian newspeak of the political class. Moving deftly from Honolulu to Jakarta, between romance, farce and tragedy, Democracy is a tour de force from a writer who can dissect an entire society with a single phrase.