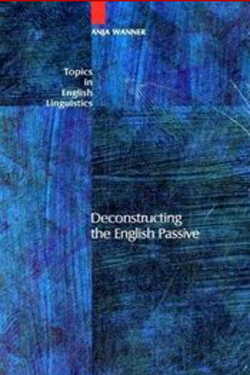 This book analyzes the form and function of the English passive from a verb-based point of view. It takes the position that the various surface forms of the passive (with or without thematic subject, with or without object, with or without by-phrase, with or without auxiliary) have a common source and are determined by the interplay of the syntactic properties of the verb and general syntactic principles. Each structural element of the passive construction is examined separately, and the participle is considered the only defining component of the passive. Special emphasis is put on the existence of an implicit argument (ususally an agent) and its representation in the passive. A review of data from syntax, language acquisition, and psycholinguistics shows that the implicit agent is not just a conceptually understood argument. It is argued that it is represented at the level of argument structure and that this is what sets the passive apart from other patient-subject constructions. A corpus-based case study on the use of the passive in academic writing analyzes the use of the passive in this particular register. One of the findings is that about 20-25% of passives occur in constructions that do not require an auxiliary, a result that challenges corpus studies on the use of the passive that only consider full be-passives. It is also shown that new active-voice constructions have emerged that compete with the passive without having a more visible agent. The emergence of these constructions (such as “This paper argues…”) is discussed in the context of changes in the rhetoric of scientific discourse. The book is mainly of interest to linguists and graduate students in the areas of English syntax, semantics, and pragmatics.