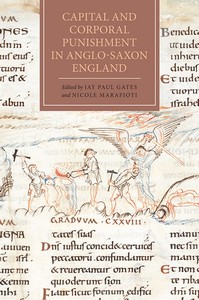 The ten essays in this volume engage legal, literary, historical, and archaeological evidence to investigate the role of punishment in Anglo-Saxon society. Three dominant themes emerge in the collection. First is the shift from a culture of retributive feud to a system of top-down punishment, in which penalties were imposed by an authority figure responsible for keeping the peace. Second is the use of spectacular punishment to enhance royal standing, as Anglo-Saxon kings sought to centralize and legitimize their power. Third is the intersection of secular punishment and penitential practice, as Christian authorities tempered penalties for material crime with concern for the souls of the condemned. Together, these studies demonstrate that in Anglo-Saxon England, capital and corporal punishments were considered necessary, legitimate, and righteous methods of social control.

Jay Paul Gates is Assistant Professor at John Jay College of Criminal Justice in The City University of New York.