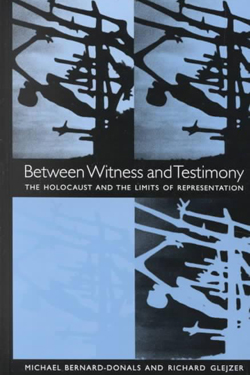 “One of the book’s strengths is that it speaks to many of its potential competitors. Reading this book will lead people new to the study of the Shoah to read other books. This is a rare book, one that is interesting not only in terms of what it says but in terms of what it prompts its readers to reconsider.” – David Metzger, Old Dominion University

The Holocaust presents an immense challenge to those who would represent it or teach it through fiction, film, or historical accounts. Even the testimonies of those who were there provide only a glimpse of the disaster to those who were not. Between Witness and Testimony investigates the difficulties inherent in the obligation to bear witness to events that seem not just unspeakable but also unthinkable. The authors examine films, fictional narratives, survivor testimonies, and the museums at Yad Vashem and the United States Holocaust Memorial Museum in order to establish an ethics of Holocaust representation. Traversing the disciplines of history, philosophy, religious studies, and literary and cultural theory, the authors suggest that while no account adequately provides access to what Adorno called “the extremity that eludes the concept,” we are still obliged to testify, to put into language what history cannot contain.

Michael Bernard-Donals is Professor of English and Jewish Studies at the University of Wisconsin, and the author of The Practice of Theory: Rhetoric, Knowledge, and Pedagogy in the Academy and Mikhail Bakhtin: Between Phenomenology and Marxism. Richard Glejzer is Assistant Professor of English at North Central College. They are the coeditors of Rhetoric in an Antifoundational World: Language, Culture, and Pedagogy.