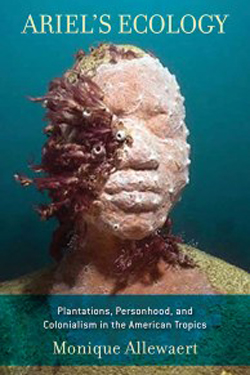 What happens if we abandon the assumption that a person is a discrete, world-making agent who acts on and creates place? This, Monique Allewaert contends, is precisely what occurred on eighteenth-century American plantations, where labor practices and ecological particularities threatened the literal and conceptual boundaries that separated persons from the natural world. Integrating political philosophy and ecocriticism with literary analysis, Ariel’s Ecologyexplores the forms of personhood that developed out of New World plantations, from Georgia and Florida through Jamaica to Haiti and extending into colonial metropoles such as Philadelphia. Allewaert’s examination of the writings of naturalists, novelists, and poets; the oral stories of Africans in the diaspora; and Afro-American fetish artifacts shows that persons in American plantation spaces were pulled into a web of environmental stresses, ranging from humidity to the demand for sugar. This in turn gave rise to modes of personhood explicitly attuned to human beings’ interrelation with nonhuman forces in a process we might call ecological. Certainly the possibility that colonial life revokes human agency haunts works from Shakespeare’s Tempestand Montesquieu’s Spirit of the Laws to Spivak’s theories of subalternity. In Allewaert’s interpretation, the transformation of colonial subjectivity into ecological personhood is not a nightmare; it is, rather, a mode of existence until now only glimmering in Che Guevara’s dictum that postcolonial resistance is synonymous with “perfect knowledge of the ground.”