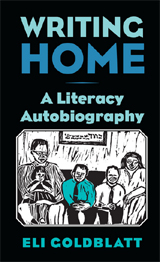 Goldblatt connects his educational journey as a poet and a teacher to his conception of literacy, and assesses his intellectual, emotional, and political development through undergraduate and postgraduate experiences alongside the social imperatives of the era. He explores his decision to leave medical school after he realized that he could not compartmentalize work and creative life or follow in his surgeon father’s footsteps. A brief first marriage rearranged his understanding of gender and sexuality, and a job teaching in an innercity school initiated him into racial politics. Literacy became a dramatic social reality when he witnessed the start of the national literacy campaign in postrevolutionary Nicaragua and spent two months finding his bearings while writing poetry in Mexico City.

Goldblatt presents a thoughtful and exquisitely crafted narrative of his life to illustrate that literacy exists at the intersection of individual and social life and is practiced in relationship to others. While the concept of literacy autobiography is a common assignment in undergraduate and graduate writing courses, few books model the exercise. Writing Home helps fill that void and, with Goldblatt’s emphasis on “out of school” literacy, fosters an understanding of literacy as a social practice.