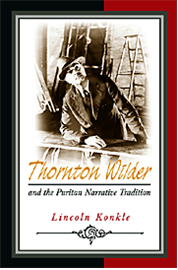 Konkle shows that Thornton Wilder, as a literary descendant of Edward Taylor, inherited the best of the Puritans’ worldview and drew upon those attributes of the Puritan tradition within American literature that would strike a fundamental chord with his American audience. By providing close readings of Wilder’s texts against seventeenth- and eighteenth-century Puritan culture and literature, Konkle demonstrates that Wilder’s aesthetic was not just generically allegorical but also typically American and his religious sensibility was not just generally Christian, but specifically Calvinist. He alsoemphasizes aspects of Puritan theology, ideology, and aesthetics that have been suppressed or repressed into our cultural unconscious but are manifested in Wilder’s texts in response to various historical or personal stimuli. Konkle makes an original contribution to Wilder scholarship by providing the first in-depth readings of the full-length play The Trumpet Shall Sound and of the film Shadow of a Doubt (as a major work of Wilder). Also included are readings of little-known and seldom-discussed dramatic pieces, including Proserpina and the Devil, And the Sea Shall Give Up Its Dead, and Our Century. With its emphasis on the continuities of thought and form found in American literature from the seventeenth century to the twentieth, this analysis of Wilder’s drama and fiction will reclaim him as an intrinsically American writer, deserving to be read within the context of American literary and cultural traditions.