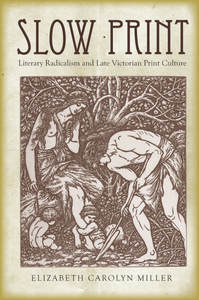 In response, they purposely reduced the scale of print by appealing to a small, counter-cultural audience. “Slow print,” like “slow food” today, actively resisted industrial production and the commercialization of new domains of life. Drawing on under-studied periodicals and archives, this book uncovers a largely forgotten literary-political context. It looks at the extensive debate within the radical press over how to situate radical values within an evolving media ecology, debates that engaged some of the most famous writers of the era (William Morris and George Bernard Shaw), a host of lesser-known figures (theosophical socialist and birth control reformer Annie Besant, gay rights pioneer Edward Carpenter, and proto-modernist editor Alfred Orage), and countless anonymous others.