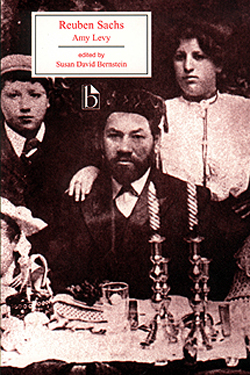 Oscar Wilde wrote of this novel, “Its directness, its uncompromising truths, its depth of feeling, and above all, its absence of any single superfluous word, make Reuben Sachs, in some sort, a classic.” Reuben Sachs, the story of an extended Anglo-Jewish family in London, focuses on the relationship between two cousins, Reuben Sachs and Judith Quixano, and the tensions between their Jewish identities and English society. The novel’s complex and sometimes satirical portrait of Anglo-Jewish life, which was in part a reaction to George Eliot’s romanticized view of Victorian Jews in Daniel Deronda, caused controversy on its first publication.

This Broadview edition prints for the first time since its initial publication in The Jewish Chronicle Levy’s essay “The Jew in Fiction.” Other appendices include George Eliot’s essay on anti-Jewish sentiment in Victorian England and a chapter from Israel Zangwill’s novel The Children of the Ghetto. Also included is a map of Levy’s London with landmarks from her biography and from the “Jewish geography” of Reuben Sachs.