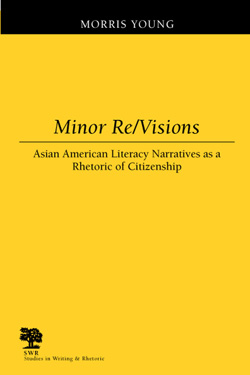 Through a blend of personal narrative, cultural and literary analysis, and discussions about teaching, Minor Re/Visions: Asian American Literacy Narratives as a Rhetoric of Citizenship shows how people of color use reading and writing to develop and articulate notions of citizenship. Morris Young begins with a narration of his own literacy experiences to illustrate the complicated relationship among literacy, race, and citizenship and to reveal the tensions that exist between competing beliefs and uses of literacy among those who are part of dominant American culture and those who are positioned as minorities. Influenced by the literacy narratives of other writers of color, Young theorizes an Asian American rhetoric by examining the rhetorical construction of American citizenship in works such as Richard Rodriguez’s Hunger of Memory, Victor Villanueva’s Bootstraps: From an American Academic of Color, Carlos Bulosan’s America Is in the Heart, and Maxine Hong Kingston’s “Song for a Barbarian Reed Pipe” from Woman Warrior. These narratives, Young shows, tell stories of transformation through education, the acquisition of literacy, and cultural assimilation and resistance. They also offer an important revision to the American story by inserting the minor and creating a tension amid dominant discourses about literacy, race, and citizenship. Through a consideration of the literacy narratives of Hawaii, Young also provides a context for reading literacy narratives as responses to racism, linguistic discrimination, and attempts at “othering” in a particular region. As we are faced with dominant discourses that construct race and citizenship in problematic ways and as official institutions become even more powerful and prevalent in silencing minor voices, Minor Re/Visions reveals the critical need for revising minority and dominant discourses. Young’s observations and conclusions have important implications for the ways rhetoricians and compositionists read, teach, and assign literacy narratives.