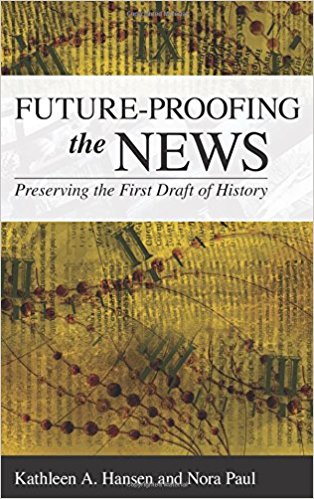 News coverage is often described as the “first draft of history.” From the publication in 1690 of the first American newspaper, Publick Occurrences, to the latest tweet, news has been disseminated to inform its audience about what is going on in the world. But the preservation of news content has had its technological, legal, and organizational challenges. Over the centuries, as new means of finding, producing, and distributing news were developed, the methods used to ensure future generations’ access changed, and new challenges for news content preservation arose. This book covers the history of news preservation (or lack thereof), the decisions that helped ensure (or doom) its preservation, and the unique preservation issues that each new form of media brought.
All but one copy of Publick Occurrences were destroyed by decree. The wood-pulp based newsprint used for later newspapers crumbled to dust. Early microfilm disintegrates to acid and decades of microfilmed newspapers have already dissolved in their storage drawers. Early radio and television newscasts were rarely captured and when they were, the technological formats for accessing the tapes are long superseded. Sounds and images stored on audio and videotapes fade and become unreadable. The early years of web publication by news organizations were lost by changes in publishing platforms and a false security that everything on the Internet lives forever.
In 50 or 100 years, what will we be able to retrieve from today’s news output? How will we tell the story of this time and place? Will we have better access to news produced in 1816 than news produced in 2016? These are some of the questions Future-Proofing the News aims to answer.