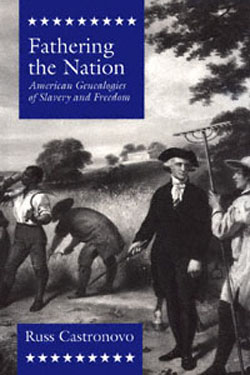 Fathering the Nation examines competing expressions of national memory appearing in a wide range of mid-nineteenth-century artifacts, including slave autobiography, classic American fiction, monumental architechture, myths of the Revolution, proslavery writing, and landscape painting. While these images, icons, and fictions attempt to present an ordered, inspiring narrative of America, they also tell other stories that disrupt the nation. Arguing that even the most rigid representations, such as the Bunker Hill Monument and official legends of the founding fathers, are incoherent, Castronovo presents a geneology that recovers those members of the national family whose status challenges the body politic and its history. The forgotten orphans in Melville’s Moby Dick and Israel Potter, the rebellious slaves in the work of Frederick Douglass and William Wells Brown, the citizens afflicted with amnesia in Lincoln’s speeches, and the dispossessed sons in slave narratives all provide dissenting voices that provoke insurrectionary plots and counter-memories. Viewed here as a “miscegenation” of stories, the narrative of “America” resists being told in terms of an intelligible story of uncontested descent. National identity rests not on rituals of consensus but on repressed legacies of parricide and rebellion.