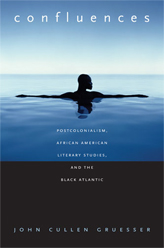 For readers who may not be well acquainted with one or more of the three theories, Gruesser provides concise introductions in the opening chapter. In addition, he urges those people working in postcolonial or African American literary studies to attempt to break down the boundaries that in recent years have come to isolate the two fields. Gruesser then devotes a chapter to each theory, examining one literary text that illustrates the value of the theoretical model, a second text that extends the model in a significant way, and a third text that raises one or more questions about the theory. His examples are drawn from the writings of Salman Rushdie, Jean Rhys, V. S. Naipaul, Walter Mosley, Pauline Hopkins, Toni Morrison, Harry Dean, Harriet Jacobs, and Alice Walker. Cautious not to conflate postcolonial and African American studies, Gruesser encourages critics to embrace the black Atlantic’s emphases on movement through space (routes rather than roots) and intercultural connections and to expand and where appropriate to emend Gilroy’s efforts to bridge the two fields.