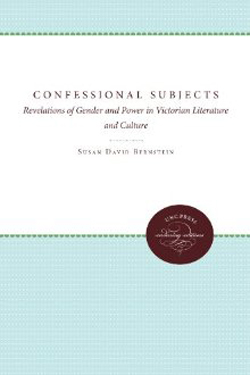 Susan Bernstein examines the gendered power relationships embedded in confessional literature of the Victorian period. Exploring this dynamic in Charlotte Bronta’s Villette, Mary Elizabeth Braddon’s Lady Audley’s Secret, George Eliot’s Daniel Deronda, and Thomas Hardy’s Tess of the d’Urbervilles, she argues that although women’s disclosures to male confessors repeatedly depict wrongdoing committed against them, they themselves are viewed as the transgressors. Bernstein emphasizes the secularization of confession, but she also places these narratives within the context of the anti-Catholic tract literature of the time. Based on cultural criticism, poststructuralism, and feminist theory, Bernstein’s analysis constitutes a reassessment of Freud’s and Foucault’s theories of confession. In addition, her study of the anti-Catholic propaganda of the mid-nineteenth century and its portrayal of confession provides historical background to the meaning of domestic confessions in the literature of the second half of the century.