Public Lecture: Priscilla Wald, “Between Angels and Replicants: ‘What is Human Now?'”

Between Angels and Replicants: ‘What is Human Now?’ 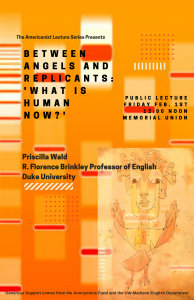 A woman pregnant with her grandchild; a hamster in a state of suspended animation; human cells reproducing into eternity.  These are some of the biotechnological innovations that seemed to blur the line between science and science fiction in the decades following the Second World War.  Public accounts of these innovations emerged against the backdrop of debates in social and political thought surrounding the atrocities of two global conflagrations and, more broadly, colonialism.  Legal cases and policy debates, the mainstream media and popular fiction and film all attest to the convergence of scientific innovation and geopolitical transformation in new accounts of the human—and of life itself—in the decades following the war.  Questions abounded: if we can create life in a laboratory and patent it in the courts, what will happen to the basic dignity of humankind? What will happen to human relationships to other humans and to the world at large? Such questions circulated through the courts and the media, but it was in the science fictional scenarios that writers could work through the dangers and possibilities, the hopes and fears, associated with the science and register as well the emergence of new scientific creation stories for humanity in the age of biotechnology.  This talk draws on the legal cases and policy debates, news accounts and especially science fiction—with a focus on Ridley Scott’s cinematic adaptation of Philip K. Dick’s Do Androids Dream of Electric Sheep?: the 1982 cult classic Bladerunner–to chronicle the scientific creation stories that emerged to explain the radically changing figure of the human, to forecast its destiny, and to create by imagining a biotechnological world.

Priscilla Wald is the R. Florence Brinkley Professor of English at Duke University and current co-editor of American Literature. Her recent work explores contemporary narratives of science and medicine, science fiction literature and film, law and literature, and environmental studies.

Share on:
+ Add to Google Calendar+ Add to iCalendar