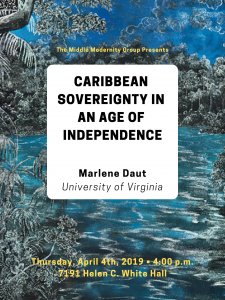 Since the West Indies saw the forced introduction of the most enslaved Africans in all of the Americas,  the most written about element of early Caribbean writing in contemporary scholarship is without a doubt plantation slavery, including abolition and slave revolt and rebellion. However, even while drawing attention to these concerns, much of nineteenth-century Caribbean writing, in the works of Cuba’s Félix Varela, Haiti’s Émeric Bergeaud, and Puerto Rico’s Ramón Emeterio Betances, for example, also show distinct concerns with ideas of sovereignty. In contrast to many colonial European writers, rather than illustrating an obsessive concern with racialized revolution or at once idyllic and treacherous scenes of tropical paradise, the Caribbean writings under discussion in this talk demonstrate a clear shift toward trying to determine the meaning of freedom in a life after slavery, and what kinds of new identities the inhabitants of a post-slavery Caribbean might take on.